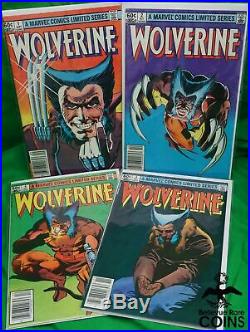 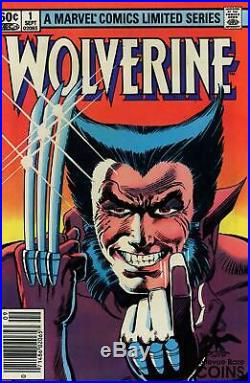 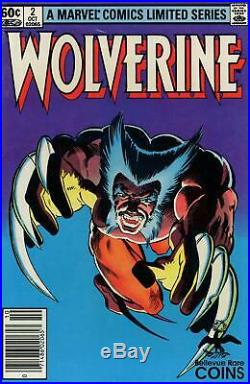 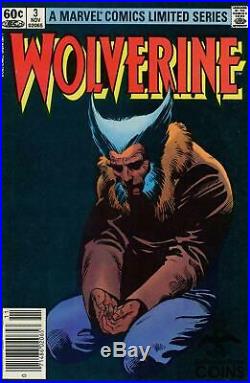 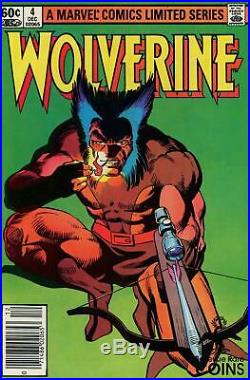 Lot of 4: Wolverine #1-4 Comic Book Series Set (VF). This lot contains Marvel’s Wolverine #1-4 in VF condition. This limited series was the first time that Wolverine was featured in his own title! Written by the legendary X-men author Chris Claremont with pencils from comic book powerhouse Frank Miller, this series gave readers a story that they had been yearning for and definitely helped play into the part of how popular Wolverine is today! All comics come bagged and boarded. Comics have been stored in dry, non-smoking area. From his first appearance in the Incredible Hulk #180 Wolverine was quickly established as a force to be reckoned with, being able to stand up against the Incredible Hulk. Featuring stories from all across history James Logan stood as a conduit for story telling that isnt able to be achieved by many fictional characters. Stories featuring time in WWII Japan, the Civil War, all the way to modern stories of him fighting alongside the Avengers and the X-Men. Hes the best there is at what he does, and his popularity goes to prove it. Starring in the X-Men movies, to his own spin offs, Wolverine has led some of the most popular superhero movies out there and was brought to life by Hugh Jackman. With the Uncanny X-Men getting ready to join the MCU itll be exciting to see how Wolverine is adopting into the Marvel Cinematic Universe. Established in 1961 and originally founded as Timely Comics by Martin Goodman in 1939, Marvel comics is one of the largest comic book publishers, putting out some of the most iconic characters that are now known as household names. The publisher as we now know it has been around for almost 60 years, and had some catching up to do with its competitor DC Comics. Stories told in the Marvel universe opted for a different approach of being more focused on personal issues and bringing real heart to the characters that they would feature. This brought a lot of credibility as comic books continued to evolve into being more than just something for kids. This approach helped differentiate from the competition and led to Spider-Man, Iron Man, The Incredible Hulk, Daredevil, The Punisher, The Silver Surfer, Thor, Captain America, and The Fantastic Four being the names they are today. Of course without the dastardly villains these heroes wouldnt have good stories to tell, fighting the likes of The Green Goblin, Doctor Doom, Galactus, Doctor Octopus, Magneto, Red Skull, Loki, Kingpin, and so many others. These characters have lent themselves to some of the most memorable fights and conflicts that would continue to influence mediums in and out of the comic book world, this has been felt for the past 60 years and will continue far into the future. If you should have any questions or concerns, please feel free to message us Monday – Saturday 9:30am – 5:30pm via ebays Ask question button below. We add hundreds of new coin and bullion listings weekly. All return requests must be made within 14 calendar days of customer receiving the merchandise. About Bellevue Rare Coins. Bellevue Rare Coins is a family-owned and operated business who have been proudly offering their services since 1979. We are the leading rare coin and currency dealer in the Greater Seattle Area who also specialize in jewelry and estate items. We are focused on delivering a simpler experience to our customers. Providing a reputation that dramatically affects our consumers in a positive way. We ensure that our clients always feel welcome and valued. The item “Lot of 4 Wolverine #1-4 Comic Book Series Set (VF)” is in sale since Thursday, September 19, 2019. This item is in the category “Collectibles\Comics\Collections”. The seller is “bellevuerarecoins” and is located in Tacoma, Washington. This item can be shipped to United States, Canada, United Kingdom, Denmark, Finland, Australia, Greece, Portugal, Cyprus, Japan, China, Sweden, South Korea, Taiwan, Thailand, Belgium, France, Hong Kong, Ireland, Netherlands, Poland, Spain, Italy, Germany, Austria, Bahamas, New Zealand, Philippines, Singapore, Switzerland, Norway, Saudi arabia, Qatar, Bahrain, Malaysia, Trinidad and tobago, Jamaica, Antigua and barbuda, Bermuda, Brunei darussalam, Gibraltar, Iceland, Viet nam.